Best Of Stories
Dreissigacker Winery: We meet in Bechtheim, in the village centre where an alley leads to a typical Rhine-Hessian farmstead. The building is prettily renovated in the colours grey and white, just like many wineries.

The terraced winery is cut into the landscape. Credit: Wolfgang Junglas

Winery building where the wine grows

40-year-old Jochen Dreissigacker is relaxed but wants to move on as it is not possible to show me his vision here in these historic rooms, in the vinotheque. So, we drive off – out of town and away from the showroom – towards his vision of a modern winery.
My first reaction as I arrive: Wow! – I would never have imagined the new premises to be this big!

The terraced winery is cut into the vineyard of the Bechtheim Heiligkreuz landscape. Greenery adorns the roof of the three levelled building with its narrow row of windows and blends harmoniously into the landscape despite its size. The winery is cut nine metres deep into the slope, blending into the Rhine-Hessian hill topography. The building complies to the winemaker’s terroir philosophy: the wine is made in the very soil in which the vines have grown.

So how did the young winemaker come to realize such a project of this magnitude? His parents Frieder and Ute Dreissigacker advised him from an early age, “Learn something sensible!”. And his older brother, Christian, was meant to take over the classic Rhine-Hessian 12-hectare business along with its wine tavern and 45 wines in the wine card. Thus,heeding his parent’s advice, Jochen went to work in a tax consultant’s office. But his love of wine remained. 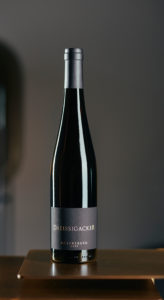 In 15 years into the top of the region

He then trained as a winemaker at the renowned Bergdolt (Palatinate) and Keller (Rheinhessen) wineries. And passed the viticulture technician exam in Weinsberg. In 2002, his parents handed over the business to him and his brother Christian. At that time Jochen was just 21 years old and his brother only a few years older. Jochen brings new ideas to the family business and Christian helps him to implement them. Terroir is the magic word for the winery’s new profile. Jochen purposefully seeks out vineyards with old Riesling vines where he exchanges them for sites with Dornfelder vines.

However, it didn’t stop with just concentrating on Riesling: the whole business was turned upside down and realigned. Christian decided to take a different path: Being presented with the opportunity, he acquired the Dr. Koehler winery in Bechtheim and began to focus on easy-drinking wines, especially Burgundy varieties.

Jochen has been running the winery single-handed since 2006 and continues to hone his consistent wine philosophy: concentration on Riesling, spontaneous fermentation, manual harvesting, gentle grape processing, long ripening period, organic production methods. The 48-hectare farm has been eco-certified since 2020. 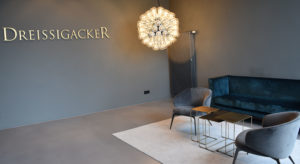 “Sustainability is more than just a buzzword!”

Jochen Dreissigacker began planning and building the imposing new winery building in 2006. And by 2017 he was able to process the first harvest in the new building. The grapes are delivered in crates and transported by drop pressure. The tank and barrel capacities are sufficient for 1 ½ harvests: An unusually large number of small tank units allow for the targeted maturation of small containers. Wine maestro, Jochen Dreissigacker, works with a young, committed team. The wines, especially the Rieslings, show an independent character. Not “Everbody’s darling” says the young winemaker.

The complex wines, highly rated by wine guides, are aimed at wine lovers who appreciate wines with a strong character. 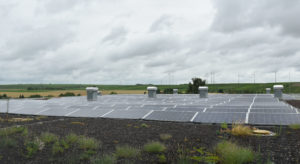 The building has a green wooden roof and a photovoltaic system. Credit: Wolfgang Junglas

The wines in the bottle are as sustainable as the building with its green wooden roof and photovoltaic system: matured in tranquillity, they give wine lovers pleasure for a long time.

“Sustainability is more than just a buzzword or trend for me. It’s something absolutely essential.” says Jochen Dreissigacker.

And it is precisely for this philosophy that Great Wine Capitals have awarded him the “Best of Wine Tourism Award” in the category “Sustainability in Tourism”. For visitors to witness for themselves this concept guided tours of the winery are offered.

← PREV: Sustainable Farming at Honig Winery in Napa Valley NEXT: Tenuta Santa Maria di Gaetano Bertani: an expression of the terroir and of a grand passion →
Best Of Stories