Good Living in a German “Winzerschlösschen”

Best Of Stories
Restored to the detail, "Gut Leben am Morstein" earned the prize for the Great Wine Capitals Best of Wine Tourism Award 2022 in the category "Architecture, Parks & Gardens".

So, what does a perfect German vintner’s house actually look like? A half-timbered house with grapevine or concrete ashlar with solar panels maybe? Winzerschlösschen, which was built in 1899 in the style of historicism, is neither one nor the other, but rather a beautiful monument to German wine architecture.

It’s no wonder that Stefan Spies spontaneously fell in love with the property, after seeing a picture of the building for sale in Westhofen.

However, the business economist, who is head of an advertising agency in Frankfurt and with plenty of experience with big brand names, immediately recognised the potential of the whole property.

Historic atmosphere awakened by a “Prince” 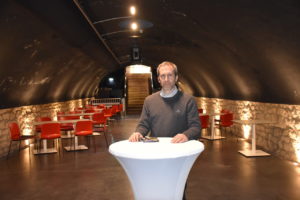 When he discovered the property in 2012, it had been slumbering in a deep sleep for 30 years, and had been uninhabited for 15 years: “Prince” Stefan awakened it to new splendour with his enthusiasm: “Time had stood still in the historic house, the inventory was still intact, and I imagined all the things I could do with the whole ensemble!”

At the end of the 19th century, a wealthy winegrower from Rhineland-Hesse had the building built outside the former village boundaries as a “lighthouse”. The Mannheim architect, Haldenwang, designed the little castle which boasted farm buildings, spacious gardens, and a wine cellar built in the old moat. The architect was given free hand by using elements from various eras: Baroque, Wilhelminian and Art Nouveau. 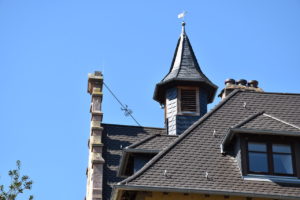 The extensive renovation lasted five years, from the roof to the cellar, in an attempt to come as close as possible to the original condition. “We rebuilt the roof turret, which no longer existed, true to the original according to the building plans from back then”, the proud owner tells us.

Restored to the detail 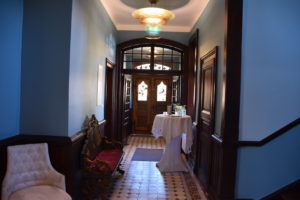 The entrance to the historic house.
Credit: Wolfgang Junglas

The three former children’s rooms and the salon on the first-floor are today used as banquet and conference rooms. They look impressive with their historic wallpaper and light switches. The main entrance on the ground floor with its original tiles is reminiscent of the reception of a former upper-middle-class stately home.

Attention to detail is evident everywhere: the original ceramic tiles from the kitchen, which were no longer allowed to be used for health and safety reasons, were carefully removed, and laid down in the restaurant toilet. In the restaurant with its romantic bay window, you can feel the spirit of the 19th century. “In the beginning, guests came mainly for the architecture”, Stefan Spies tells us, “now they come to enjoy our cuisine!”

Wine as a consistent theme 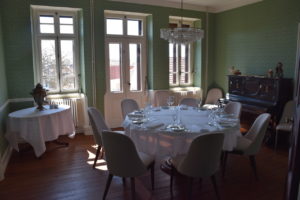 View into the restaurant with romantic windows.
Credit: Wolfgang Junglas

The restaurant offers upscale home-style cooking with a strong focus on vegetable-based dishes. The theme of wine pervades through the entire location. The vineyard, which belongs to the estate on the renowned Morstein site, is leased and only regional Rhineland-Hesse wines being offered in the restaurant. In the outdoor area, Stefan Spies has paid special attention to the originally planned routing and layout of the grounds. The vineyard and the wine arbour blend in harmoniously and create a cosy setting for the outdoor gastronomy. 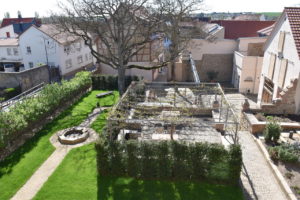 Sustainability and attentiveness are part of “Gut Leben am Morstein”: This applies to the use of materials in the conference buildings and the installation of a combined heat and power unit. The unique event location is complemented by the appealing cultural programme held in the wine cellar as well as the adjoining 20-room hotel on a former Rhineland-Hesse farmstead. Here Stefan Spies has created an impressive total work-of-art around wine. 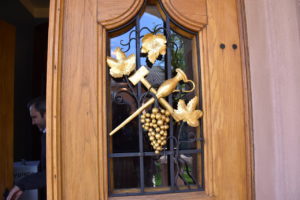 The house was restored to the detail.
Credit: Wolfgang Junglas

With this beacon for wine tourism, “Gut Leben am Morstein” has more than earned the prize for the Great Wine Capitals Best of Wine Tourism Award 2022 in the category “Architecture, Parks & Gardens”.

To learn more about “Gut Leben am Morstein” visit the website.

Learn more about Rheinhessen and its wine capital Mainz on their page: Mainz | Rheinhessen

← PREV: Château George 7, 2022 Best Of Wine Tourism for Architecture & Landscape in Bordeaux NEXT: Quinta da Aveleda and the lost bottle →
Best Of Stories