This is the wine that Martin Luther loved, a rather strong white wine with full body and full of ripeness – the yellow golden Malvasia is one of the oldest and most historic grape varieties. " It was the Menger family who saved that historic grape variety for cultivation in Germany – by far not the only reason for the Best of Wine Tourism Award 2020.

This is the wine that Martin Luther loved, a rather strong white wine with full body and full of ripeness – the yellow golden Malvasia is one of the oldest and most historic grape varieties. “Until 1720, all of the famous “Roter Hang” in Nierstein was covered with Malvasia,” Dagmar Rückrich-Menger says.Today, the Winery H.L. Menger in Eich in Rheinhessen is one of the few where Malvasia is still cultivated. It was the Menger family who saved that historic grape variety for cultivation in Germany – by far not the only reason for the Best of Wine Tourism Award 2020.

Sustainability is the category in which, the Great Wine Capital judges awarded the small winery in the south of Rheinhessen, and if sustainability means outlasting, caring, preserving and having a heart for heritage, then they probably couldn’t have found a better place. Since 1651 the Menger family has been recorded in the village of Eich right on the banks of the Rhine, as winemakers, landowners and also as the mayors of their village.

“I am the twelfth generation in direct succession,” Horst Menger says. His most intense red wine is named after his grandfather, a cavalry captain or in german “Rittmeister”. His grandma exported Menger wines all the way to Great Britain, it was the 1930s, and the famous Liebfraumilch was high in demand on the British island. “Yes, we were entitled to produce the Liebfraumilch,” Menger says – Eich is so close to Worms, the home of that famous sort of wine, that it belonged to that traditional region described by the old saying “as far as the shadow of the church tower falls, Liebfraumilch grows.”

Today, there is no Liebfraumilch on the winery’s wine list, as the wines under that brandwere considered too old fashioned. “I love Riesling, but only Riesling is way too boring,” Horst Menger laughs. 15 hectares of vineyards owns the family, spread out through six different municipalities – the closest vineyard is four kilometres from their house, the furthest 40 kilometres. “It’s fun to try different varieties,” Menger says, “if I like a grape, I want to cultivate it.” 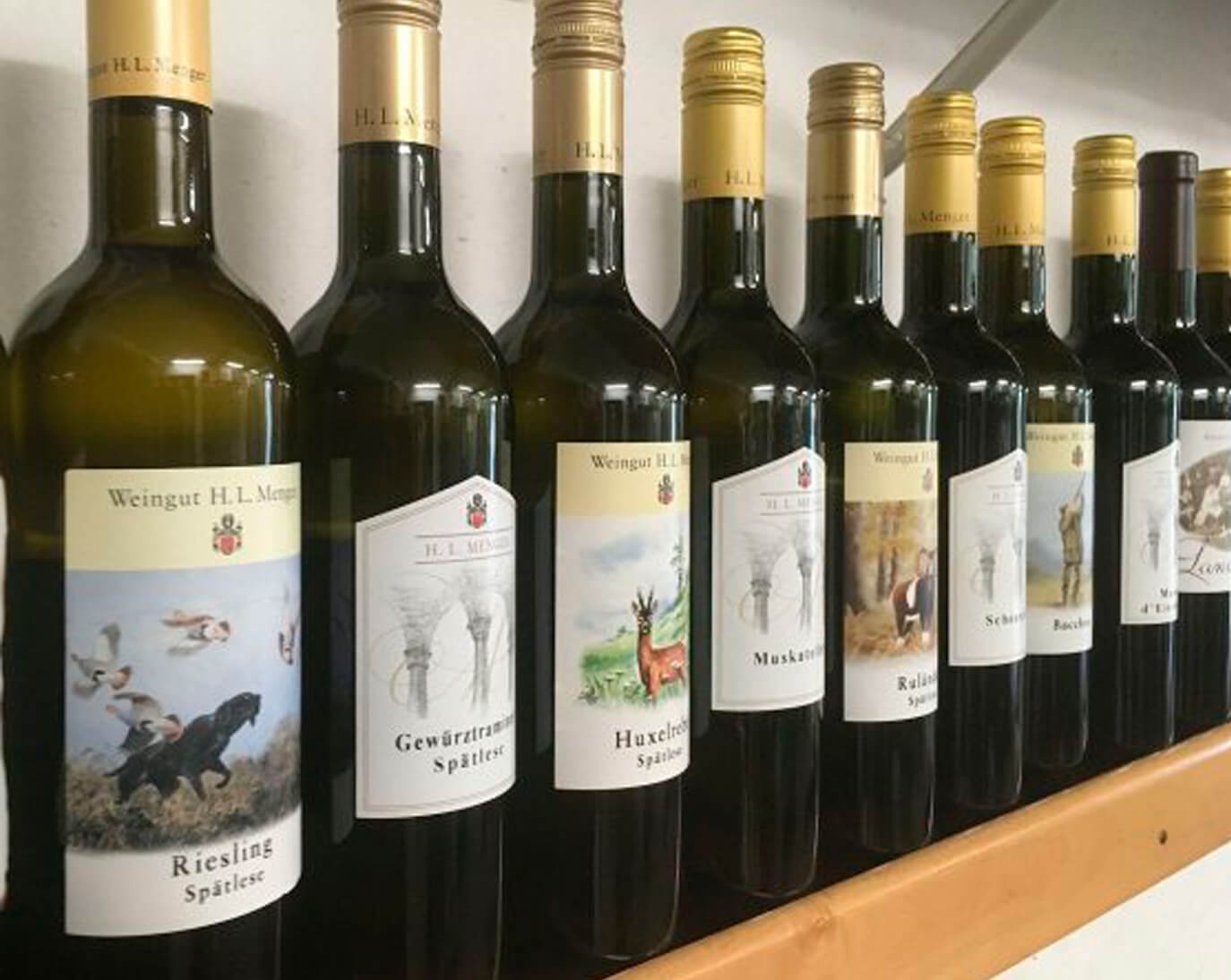 Thus, on the wine list, there are Burgundys as well as Scheurebe, Gewürztraminer as well as Tempranillo, Saint Laurent or Shiraz. More than 30 years ago, Dagmar Rückrick-Menger decided to have herself registered as a conservation breeder for Malvasia in Germany – the grape variety was almost extinct at that time and was meant to disappear from the grape register. “My grandpa had cultivated the Malvasia grapevines, we saved the old vine clones from his vineyard,” Dagmar relates, “that’s my hobby: to afford an ancient grape variety.”

The Malvasia which the Mengers produce comes in dry and sweet versions. Where her grandfather’s grape vines came from, no one knows. It was in Worms, however, on the convention of 1521 that Martin Luther refused to revoke his 95 theses in front of Emperor Charles V. with the legendary sentence: “Here I stand, I cannot do otherwise.” Maybe that’s why in the vicinity of Worms, the winemakers are more prone to self-will and individuality.

They are also prone to culinary pleasures in the house of Menger. Before the Covid-19 pandemic, the Mengers used to invite their guests to barbecues with a special feast: on the coals, deer, boar and rabbit were roasted. The whole family are passionate hunters; it is part of their sustainability philosophy. “To hunt also means to foster, and game meat is the most biological meat of all,” Horst explains. “In the end, hunting is all about awe and respect for the animal (you hunt).”

Since 2003, the painter Dieter Schiele creates the labels for the winery’s hunting wines, and the guests can delight in “Wine and Deer”-events. “A lot of people have reluctance against deer and boar,” Horst knows, “we try to show people how natural and delicious game meat is.” Hunting is part of nature, Horst and Dagmar say, and a way of appreciating what the environment has to offer. This goes in line with the barrique cellar where colored wine tastings take place, and the former stable with its vaulted ceiling – the “cow chapel” – which holds the vinotheque.

And out front, right next to the gate, an old grapevine creeps into the air. It is another ancient grape variety: an Ingram’s Muscat, an old white wine variety which was thought to be extinct. “We discovered an ancient old grapevine next to my mother’s house,” Horst remembers, only by scientific analysis the secret of the grape variety was discovered. “You take from nature what you need, but at the same time you preserve the source,” Dagmar says, “thhat’s our philosophy.”