Winery with a view: Weingut Thörle

Best Of Stories
From the glass corner room on the first floor of the winery Christoph Thörle shows me the impressive panoramic view. "On a clear day, you can see the Feldberg in the Taunus, the Donnersberg in the Palatinate and even the Hallgarten vineyards in the Rheingau!"

Rheinhessen – the “land of a thousand hills!” The hilly vineyards are shared by around 3,000 wineries. What is it that the Thörles do differently? How have they, of all people, managed to establish themselves so dynamically among the top wineries in Rheinhessen in recent years?

We are sitting in the vinotheque of the new winery building with Uta Mück-Thörle and her 36-year-old son, Christoph. I’m greeted by 38-year-old Johannes Thörle. He then excuses himself, leaving his mother and brother to talk to this time-consuming wine journalist.

“Our roles flow seamlessly into one another. My brother Johannes focuses more on wine production. My mother and I are involved in sales, my father gives his experience in the vineyard. But basically everyone is responsible for everything.” My next question as to whether the brothers compete with each other has already become superfluous. Johannes studied viticulture at Heilbronn University with Prof. Dr Ruth Fleuchaus. Christoph studied business informatics at Darmstadt Technical University. After working as a management consultant at KPMG, he joined the up-and-coming winery in 2011.

Winemaker with a vision 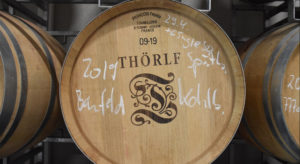 In its origins, the winery is a typical Rhine-Hessian mixed agricultural business. Winegrowing has been in the family for centuries. But due to the division of the estate, the business had shrunk considerably: the grandfather left the tithe farm in Saulheim to his sisters. The father, Rudolf Thörle, laid the foundation for today’s prosperity in the 1980s: During the wine crisis, he invested in vineyards that were difficult to cultivate, but from which he nonetheless expected high-quality wines. A winemaker with vision.

Where does this striving for quality come from? “My husband and I are both “indulgence-savvy”, and that inspired the boys!” Uta Mück-Thörle replies, and tells the legendary tale of how Christoph and his brother, Johannes, who were around ten and twelve at the time. They prepared a menu with several courses, including braised quail, served with the accompanying wines.

The family often taste wines from other wine-growing regions which is how they have trained their sense of taste. “We have travelled a lot, visited many wine regions including some member cities of the Great Wine Capitals,” Uta Mück-Thörle says. Johannes worked for six months in a winery in South Africa where he developed his interest in Cabernet Sauvignon and Sauvignon Blanc. Christoph also travels internationally: especially to Canada and Asia, and even speaks Mandarin. The winery exports to 40 countries – the export quota is 40 per cent. 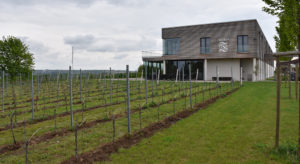 In 2019, after many years of planning, the family took the big step and built a new winery building on the outskirts of the village in the Saulheimer Hölle (Hölle or “hell” refers to a gentle slope) site. The new building corresponds to modern, straightforward winery architecture with its larch wood façade embedding the building into the vineyard landscape.

One wall in the glass vinotheque is decorated with limestone – a tribute to the natural resources of the region.

Inspiration from wineries around the world 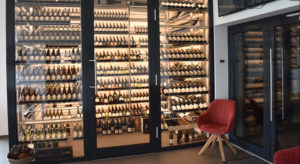 Christoph discovered the walk-in wine climate control cabinet in the Philippines. Then he copied it by a metalfitter from the region. Credit: Wolfgang Junglas

The family has taken inspiration from leading wineries around the world; in South Africa, Argentina, Italy and especially Austria. Christoph discovered the walk-in wine climate control cabinet in the Philippines. Then he copied it by a metalfitter from the region. In the vinotheque, wine tourists can now taste the wines of the 28-hectare winery in style: Primarily white wines – Riesling first! The flagship wines are the Saulheimer Ortsweine (local wines), strong in character, with a pleasant smoothness. The Silvaner from the Probstey vineyard is one of the best in the region. I find the Pinot Noirs very appealing: matured with sensitive use of barrique and bottled unfiltered. In this way they impressively show the red wine potential that exists in Rheinhessen.

No wonder that wine lovers from the big metropolitan cities of the Rhine-Main region pilgrimage to Saulheim for “After Work Tasting”. Here they can relax on the terrace, enjoy the Rhine-Hessian vision in their glass and, of course, the view.