WineFlow – Wine on the move

Best Of Stories
30 million years ago, ocean waves lapped at the beach where today countless vines stand. The small wine village of Flonheim in the heart of Rheinhessen has always been a pioneer in vintner cooperations: As early as the 1970s, when many winegrowers were not yet thinking about cooperation, the Flonheim vintners were organizing wine walks. Together they wandered through the vineyards with a group of wine lovers, pulling behind them handcarts with wine casks – even then Flonheim was on the move. Sadly however, during the wine crisis in the 80’s, the activities came to a halt. Nevertheless, in 2007 eleven wineries got together and decided to get involved in the community once again. So, movement again returned to the winegrowers' community and WineFlow was born.

Wine event at the Trullo 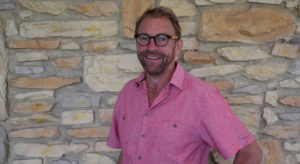 Berd Hammer has been chairman of the WineFlow eV association since 2017.
Credit: Wolfgang Junglas

Bernd Hammer was born in 1962 and is a vintner from Meyerhof in Flonheim and has been involved from the very beginning. Since 2017 he has been chairman of the WineFlow eV association: “Our passion and enthusiasm for wine unites us!” is how he describes the DNA of the association to me. In 2011, the association had a brilliant idea: “Trullo in Flames”. Around Flonheim there are two white trulli with round pointed roofs: the sheltering houses in the vineyards from the mid-18th century were probably built by workers from Apulia who were working in quarries in the region at the time. Every year, in the last week of April, the trulli are illuminated in bright light and wine lovers walk through six stations to the trullo on the Adelberg for a romantic wine tasting with delicious food.

In November, the town is on the move again: At “Flonheim schenkt ein” (“Flonheim invites”), visitors stop at the wineries’ and can conveniently sample the wines on site as well as offering typical regional delicacies to eat. And for those who are not quite so fit on their legs, a shuttle bus is also available for commuting between the wineries.

The wine style is based on “Terroir” 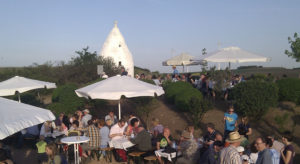 “Trullo in Flames” takes place every year in the last week of April.
Credit: Sebastian Engel

These renowned wineries mainly produce white wine – in addition to the main variety Riesling, grape varieties typical of the region such as Pinot Gris and Silvaner. The red wines are dominated by Pinot Noir, while Dornfelder is losing ground. The terroir philosophy unites the wine producers: the diversity of soils around Flonheim ensures wine types with strong character and soil characteristics. Bernd Hammer calls the predominant soil structure “parsley soil”: red-lying, deep loess-loam overlay, sandstone underneath, even basalt in some places.

The WineFlow association makes it possible to experience the Flonheim terroir in its various forms: Each winery has its own expertise and its own style of viticulture.

In addition to the terroir-based style, Bernhard Hammer has other taste strategies: he puts together new cuvées every year, which are then called “Sommerbrise”(Summer breeze) or “Feierlaune”(Festive mood) and combine the strengths of the different soils and grape varieties.

Even during the Corona Pandemic, the Flonheim wineries did not remain idle: Every Saturday, on a rotating basis until the end of October, they offer a wine tasting at the “Landjugendhäuschen”.