For 3rd time in less than 6 months, the renowned and prestigious business journal Financial Times recognizes Mendoza as excellence destination for wine tourism.

The journalist highlights in his long chronicle: "Everywhere we drove there was evidence of wine's ideas importance in Mendoza, Both as agriculture and culture." Wine unites us "- wine unites us - proclaimed a billboard on the roadside ...

The winelands of Mendoza are surely some of the loveliest in the world. Half-close your eyes and you could be in the Mediterranean; but raise them to the horizon and you are very far from southern Europe. A mighty mountain range - the Andes, no less - rises like a wall behind the vines, white-capped peaks. Their glistening in the clear air".

On a crisp March morning when the grapes hung heavy on the vines, I emerged from breakfast to find that my hire car had arrived. It was a Citroën 2CV with blue-and-gold bodywork and chequerboard upholstery, a “Prestige” model dating from 1974, parked somewhat incongruously on the gravel driveway outside the smart Cavas Wine Lodge in Mendoza, Argentina.

Beside the car stood Ramiro Marquesini, a rakish, wild-haired figure in battered brown leather jacket and aviator sunglasses. Marquesini’s day job is chief executive of Mattura, a wine industry consultancy with projects in Argentina, Chile and Peru. But his ruling passion, it’s not hard to see, lies elsewhere. Founder of Slowkar, a fleet of seven 2CVs that can be rented by the day for gentle safaris around the vines and wineries of Mendoza, his hobby is hunting down classic examples in the small ads, rebuilding and painting them in natty colours.

I sat in the driver’s seat while Marquesini gave me a crash course (so to speak) in the 2CV’s peculiar functioning, its primitive but ingenious design. The window that snaps open and shut, the notorious horizontal gear-stick, and the air-conditioning system – a flap in the dashboard which, when opened, directs a blast of fresh air straight at your face.

And then we were off, feeling every ridge and pothole of the dusty lanes that wound among the vineyards. It was the start of harvest time and the grape-pickers (mostly Bolivians) were already hard at work. Yet on this Monday morning we shared the roads with nothing more than a few battered country pickups.

The landscape in the departamento of Luján de Cuyo, half an hour out of Mendoza city, had a quiet, bucolic charm. We passed olive groves where the trees were laden with fat green fruit, orchards on the fringes of the vineyards, long avenues of plane trees and luxuriant weeping willow – originally planted to shade the grapes on their journey to the wineries.

The winelands of Mendoza are surely some of the loveliest in the world. Half-close your eyes and you could be in the Mediterranean; but raise them to the horizon and you are very far from southern Europe. A mighty mountain range – the Andes, no less – rises like a wall behind the vines, their white-capped peaks glistening in the clear air.

At a top speed of 90km/h, there was plenty of time to admire the scenery. But a vintage 2CV is also an object of admiration in itself: overtaking trucks beeped their horns; walkers on the roadside turned their heads in surprise. The push-pull gearbox crunched and screamed as I put the car through its paces but the 2CV proved surprisingly practical for the Argentine roads. Produced from 1948 to 1990, it was famously designed to enable French peasant farmers to drive 50kg of goods to market, and with suspension that would allow them to carry eggs across a ploughed field without danger of breakage. Though synonymous with rural France, it was also produced overseas in countries as diverse as Iran and Uruguay, and – from 1960 to 1980 – in Argentina (where one version was confusingly designated the 3CV).

Everywhere we drove there was evidence of wine’s importance in Mendoza, both as agriculture and culture. “El vino nos une” – wine unites us – proclaimed a billboard on the roadside. I had missed Mendoza’s famous harvest festival, the vendimia, a carnival-like event to which tourists flock from all over Argentina, but managed to catch its high-camp alternative, the vendimia para todos, in which drag queens parade to thundering techno in outfits inspired by the wine regions of the world.

Wine tourism in Mendoza is on a roll. There are balloon flights over the vineyards, picnics among the vines, even white-water rafting trips followed by wine tastings. Bodega restaurants are all the rage. So are wine hotels, both of the comfortable lodge type, and high-concept proposals such as the new Vines of Mendoza.

The Vines’ pioneering real estate plan, where you buy a patch of vineyard and the bodega makes the wine for you, has racked up 135 owners from all over the world. Its Winery Hotel meanwhile, superbly designed in stone and textured concrete, and barbecue-themed Siete Fuegos, run by star chef Francis Mallmann, are already shaping up as the region’s best hotel and restaurant. 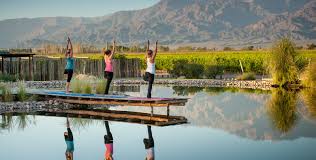 We stopped at Trapiche, a grand old winery founded in 1883, where I learned that the Malbec grape, Argentina’s star red variety, originated in France but has never performed as well there as in the hot, dry climate here. The white Torrontés I tasted at Dominio del Plata winery, where Susana Balbo has built a reput­ation as Argentina’s leading female winemaker, had a combination of flowery, exotic fragrance and a rich, but dry palate unlike anything I’d drunk from the Old World.

Generally speaking, international consumers have given too little thought to Argentine wine. Yet Argentina is the world’s fifth-largest producer and Mendoza the country’s leading region, with 965 wineries making 70 per cent of the national total. With 300 days of sunshine a year and almost no rain, Mendoza has become a mecca in the last 10 years both for winemakers – Michel Rolland, world wine guru, has his fingers in several pies here – and for investors as diverse as Pernod Ricard, Swarovski and Sylvester Stallone.

After lunch at the Ruca Malén winery, we turned on to route 86, climbing the desert plain towards Tupungato and the Uco valley – idyllic heartland of Mendoza’s wine country and its most sought-after terroir. It is in Uco that Mendoza’s most forward-thinking new projects have taken root, from the Vines of Mendoza to the winery/gallery/hotel at Casa Antucurá and the winery/gallery/restaurant/guest-house at Bodegas Salentein.

As the 2CV rattled up the track to O Fournier, one of the most ambitious of the valley’s new wineries, the stark modernist shape of the bodega loomed up among the vines. Owned by Spanish entrepreneur José Manuel Ortega Gil-Fournier, this fabulous avant-garde edifice was designed by Mendoza architects Bórmida & Yanzón – the firm that is also behind the stone-and-concrete chic of the Vines of Mendoza hotel. Ortega’s project has a real estate dimension too, with 84 vineyard plots for sale, and building work on a hotel is scheduled to begin later this year.

At O Fournier’s winery restaurant I chatted to the executive chef, Nadia Harón (who is also Ortega’s wife). A few nights earlier I had eaten at her other restaurant, in a colonial-era house in Chacras de Coria, which was named Argentina’s best in 2012. I loved the discreet charm of her cooking, which bravely, in this land of meat, puts the emphasis on vegetables. Now, she told me, she was on the point of moving to a brand-new place in Mendoza city, a 1800s mansion with high ceilings, a patio and a palm tree. A tiny woman with an almond-shaped face betraying her Spanish-Moroccan parentage, Harón is a former pharmacist and self-taught cook who moved to Mendoza with her family in 2009. They found it an easy adjustment from Spain. “The way of life here is Mediterranean – we have fitted in here so easily. There are some fantastic ingredients, great wines and olive oil. And the children’s playground has views of the Andes,” she said, pointing out of the restaurant’s plate-glass windows at the snowy cordillera.

As we drove back to Mendoza, Marquesini told me the story of his incredible journey by 2CV to the Laguna del Diamante, a lake below a volcano at 3,300 metres above sea level. The icy lagoon, beautiful and remote, is more usually reached in an off-road 4x4 vehicle – and even then it takes five hours.  Slowkar is a car-hire company with a difference – that much was abundantly clear. But there remained one doubt in my mind. What was its policy on the drink-drive issue, surely a potential hazard on any winery tour?  Marquesini waved away the question with a wicked smile.

Breathalysers were rarely encountered in Mendoza. “And if much wine is consumed, we recommend abandoning the car.”

Correction: This piece has been amended; due to an editing error, the original referred to the trip taking place in spring. Of course while March is spring in the northern hemisphere (where the writer began his journey), it is the start of autumn in Mendoza.

Paul Richardson travelled as a guest of Miraviva (miravivatravel.com). One week in Argentina, including four nights at the Vines Resort and Spa in Mendoza, two nights at Legado Mîtico in Buenos Aires, domestic flights and transfers, costs from £1,500 per person based on two people sharing. British Airways (ba.com) offers return fights from London to Buenos Aires from around £920. Slowkar (slowkar.com) rents 2CVs from $200 for two days or $500 per week