Great Wine Capitals joins the OIV as an observer member

Latest News Wine Stories
On Wednesday September 2nd, the International Organisation of Vine and Wine (OIV)* and the Great Wine Capitals Global Network had the pleasure to meet virtually to celebrate the recent observer status of the Network at the OIV. The President of the OIV, Regina Vanderlinde, addressed the opening speech expressing her desire of a fruitful feedback relationship between the […]

On Wednesday September 2nd, the International Organisation of Vine and Wine (OIV)* and the Great Wine Capitals Global Network had the pleasure to meet virtually to celebrate the recent observer status of the Network at the OIV.

The President of the OIV, Regina Vanderlinde, addressed the opening speech expressing her desire of a fruitful feedback relationship between the two entities: “As an intergovernmental organisation of a scientific and technical nature, the OIV provides a comprehensive overview of the global state of the vine and wine sector. It works to harmonise practices, supports the evolution of the sector as it faces contemporary challenges, such as digitalisation, climate change or wine tourism, thanks to its large network of international experts. And it relies on its observers to bring up the very concrete aspects of the field. Each observer, through the specific nature of its activity, contributes to providing the OIV with food for thought. They represent a direct contact with the actors and stake-holders of the sector, which is fundamental for the OIV.” 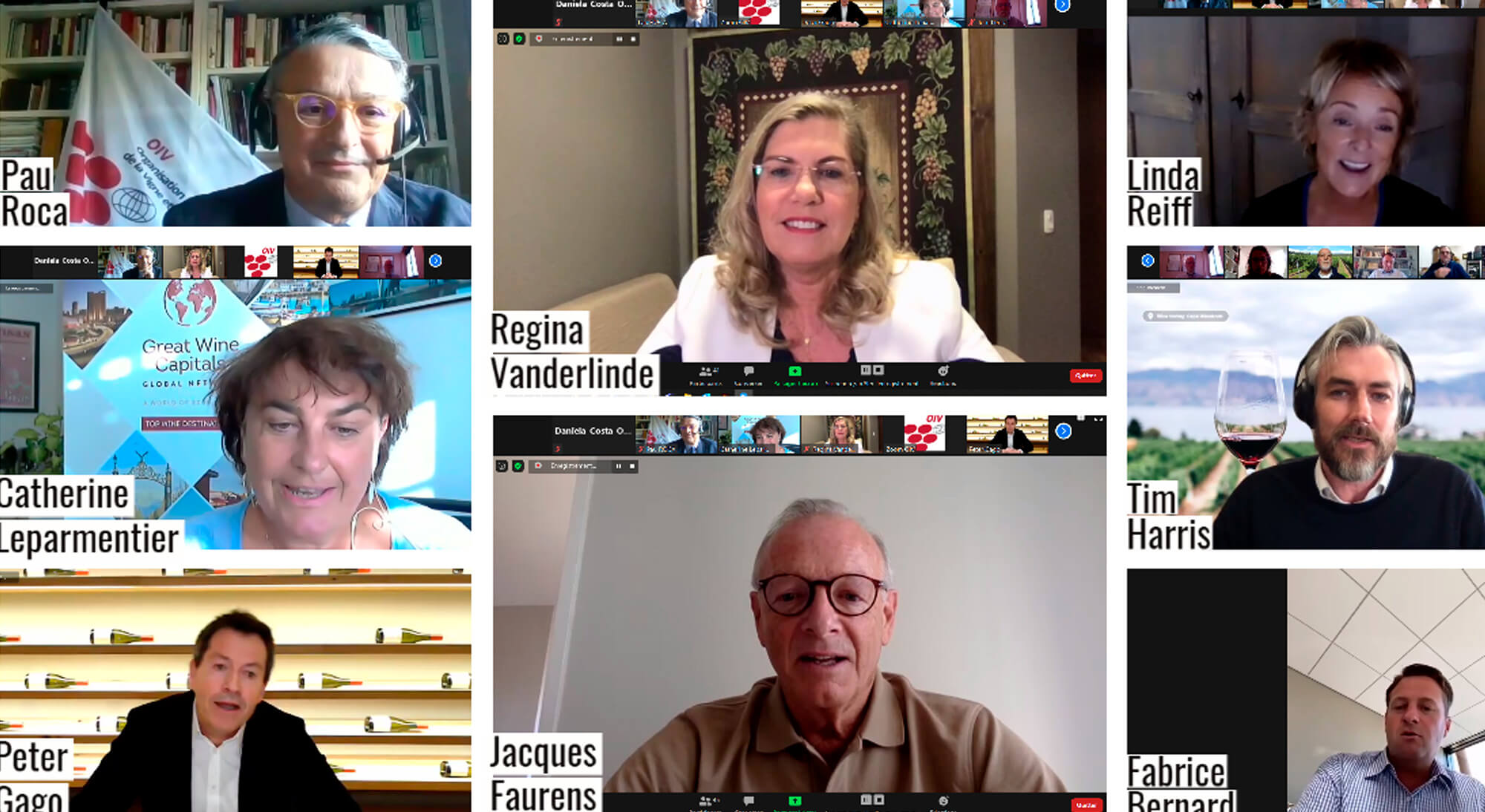 During this meeting, the Director General of the OIV, Pau Roca, and the Managing Director of GWC, Catherine Leparmentier, presented their respective structure and the advantages that this collaboration will generate.

Three speakers from GWC and its President, Jacques Faurens, then provided participants with an insight into different member cities of GWC.

Jacques Faurens spoke of the importance of creating such a network of knowledge and experience. He believes that “the extraordinary times the world is going through nowadays make us even more determined to work together to design a favourable future for the vine and wine industry”.

The first speaker, Peter Gago (Chief Winemaker at Penfolds, Adelaide | South Australia), explained that the key element of the network is to build on each others’ experience to share information and learnings between members: by focusing on how to adapt businesses, particularly in a virtual world, or on common challenges such as bushfires for California and Australia…

Linda Reiff, president and CEO of the Napa Valley Vintners, recorded a presentation in which she outlined all the benefits of the collaboration between this renowned wine region and GWC, “which helps [them] to be more successful in the best of times and in the more difficult times [the] industry faces”. According to her, it is only by sharing information, data, ideas and best practices that we can and will overcome challenges. In her opinion, being an observer at the OIV is particularly important for Napa Valley since the United States is not a member of the OIV.

Representing Cape Town, which rejointed the GWC very recently, Tim Harris, CEO of Wesgro, the Tourism, Trade and Investment Promotion Agency for this city and the Western Cape in South Africa, started his intervention in alignment with the previous speakers. “The real up sight of this cooperation is solidarity and the best practices sharing”, he stated. As a major example of these benefits, Harris referred to the 2018 drought crisis in Cape Town: “Our first call in dealing with the crisis was to our colleagues in California, which we knew have been to similar droughts, the same as with the Australians (…). By learning with them we have realised how we could engineer behaviour change in water usage in the Cape. It resulted in almost 60% reduction in water usage per person and the encouraging thing is that much of it has been maintained”, he explained.  For Tim Harris the dramatic change in attitude towards water in the Cape could serve as a model for the rest of the world as it faces the consequences of climate change. According to the representative of the city of Cape Town, the wine industry and tourism is “a really important partner to engineer a strong recovery for Cape Town and the Western Cape”.  Tim Harris ended his speech expressing his joy “to be part of the OIV, alongside the members of GWC”, which for him “can help turn the great wine industry in the Cape into an even stronger job creator to South Africans”.

Finally, Fabrice Bernard (Millésima, Bordeaux | France) recognised that the current situation in Bordeaux, generated by new health paradigms, is similar to that of the other regions of the network. However, the rapid pace of change in the sector is smoothed by the efficient communication and sharing of ideas. It is therefore a “very good opportunity [for the OIV and GWC] to now be in the same network” in order to have more agility to adapt.

GWC is the 14th observer member of the organisation, together with:

← PREV: INGREDIENTS FOR A GOOD WINE TOURIST DESTINATION: MENDOZA NEXT: Looking to the future of winegrowing in the region of Lausanne →
Latest News Wine Stories