Enjoy Spectacular Landscapes, Culture and Wine along the Pilgrims’ Route in Rioja

Since the ninth century CE when the Apostle James’s tomb was discovered in the town of Compostela in Galicia in the northwest corner of the Iberian peninsula, millions have made the pilgrimage, first from northern and central Europe and more recently from all over the world.

There are several routes through Spain, and one through Portugal, to Compostela. The most popular is the 800 kilometer “Camino Francés” or “French route” that enters Spain at Roncesvalles in the western Pyrenees. It passes through the Rioja wine district from Viana, to Logroño and on to Grañón before entering the province of Burgos. 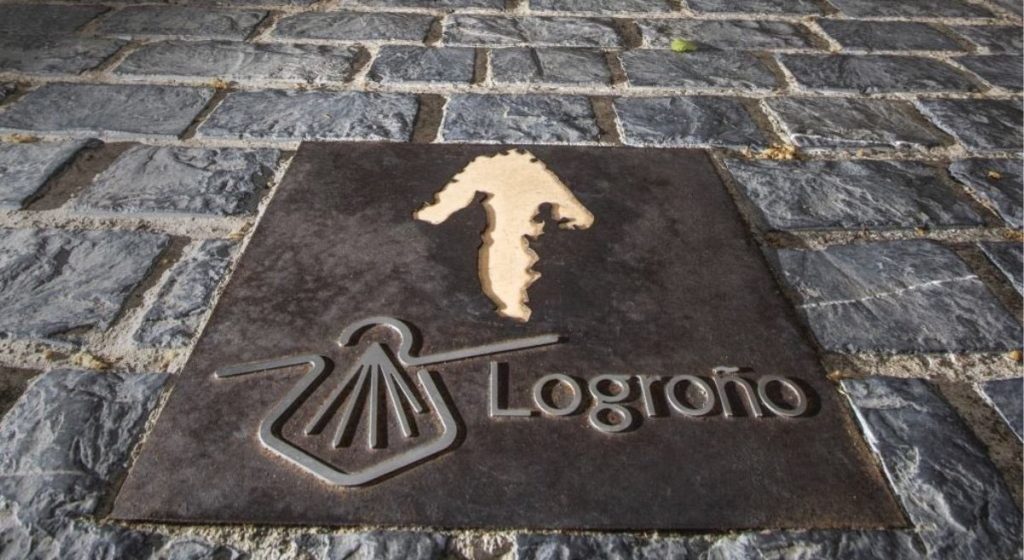 The outline of a scallop shell that shows travelers the route (Photo: Bilbao-Rioja)

There are many reasons why someone would undertake such an adventure.  For some, it’s a profoundly religious experience to travel along the same roads as millions of pilgrims for twelve centuries.  For others, it’s a way to discover the rich cultural heritage of hundreds of villages, churches, monasteries, cemeteries and crosses erected at crossroads.  Some consider it a bucket list item to check off.  Whatever one’s reason for making the hike, everyone agrees that the “Camino” is a life-changing experience.

We propose an easy hike along the Camino as it traverses Rioja – 65 kilometers from Viana to Granón in five stages, along with with some recommendations of things to see and do along the way.

Our hike begins in the town of Viana in the province of Navarra whose vineyards and wineries belong to the DOCa. Rioja.  A must-see is the tomb of Cesare Borgia, located outside the church of Santa María.  Most people will be surprised to learn that Borgia was of Spanish origin, but who spent most of his life in Italy in the service of the papacy. He was a cardinal of the Catholic Church – the first to resign this position – and a condottiero or military mercenary.  His many alliances and battles made him the subject of Niccolò Machiavelli’s The Prince.

Borgia was killed near Viana and buried in an ornate tomb under the altar in the church of Santa María.  Later, his remains were removed during renovation of the church and according to legend, the Archbishop of the nearby town of Calahorra – an enemy –  ordered that his bones be buried under the street, to be trampled on by all passersby.  Borgia’s bones were later reburied and a small monument erected outside the church.

The route continues into Logroño, where at the entrance to the 17th century stone bridge spanning the Ebro river, an old customs post is a small welcome center. Here hikers can pick up a credential that Camino volunteers stamp, attesting to a pilgrim’s passage.

If you’re interested in doing some wine tourism, about 500 meters before reaching the bridge at the crossroad of the Oyón road, a short detour leads to Bodegas Valdemar.  We recommend that you call ahead. Bodegas Faustino offers a guided tour and tasting but at the time of this writing it was temporarily unavailable.

Once inside Logroño, the route takes you through the old quarter where you can visit several churches – Santiago el Real, San Bartolomé, Santa María de Palacio, and the cathedral, as well as the Pilgrims’ fountain.  By now you should be hungry and thirsty so you might visit the bars and restaurants along the calle Laurel and adjacent streets. There are two Michelin-starred restaurants in Logroño: Íkaro and Kiro Sushi, a spot popular with Japanese from all over Spain.

A word about lodging.  At the time of this article, Rioja is beginning to emerge from the pandemic.  Consequently not all hotels, hostels and rooming houses are open, so it’s better to call ahead.

For further information about things to see and do in Logroño, you can visit the La Rioja Tourist Office at the end of calle Portales near the Murrieta fountain just west of the town center, or follow this link to the La Rioja Turismo website.

The route takes you west through the San Miguel park, and the La Grajera park and reservoir before a long hill leading to Navarrete.  On the way, you might decide to stop at Bodegas Corral, right on the road, or at Bodegas Montecillo for a short visit.

The old town in Navarrete is a Spanish historical-artistic monument and is well worth a visit.  Here you can admire the church of the Assumption with its three naves and a Baroque altarpiece. South of the village on the road to Entrena you can visit the Hermitage of Santa María del Buen Suceso. If you feel like a climb you can hike up the Cerro Tedeón, almost 600 meters above sea level, that offers a panoramic view of the southern Ebro valley. North of the village, near Bodegas Corral are the ruins of the Hospice of San Juan de Acre, whose Baroque portal was disassembled and reassembled as the entrance to the cemetery of Navarrete, west of town on the road to Nájera. 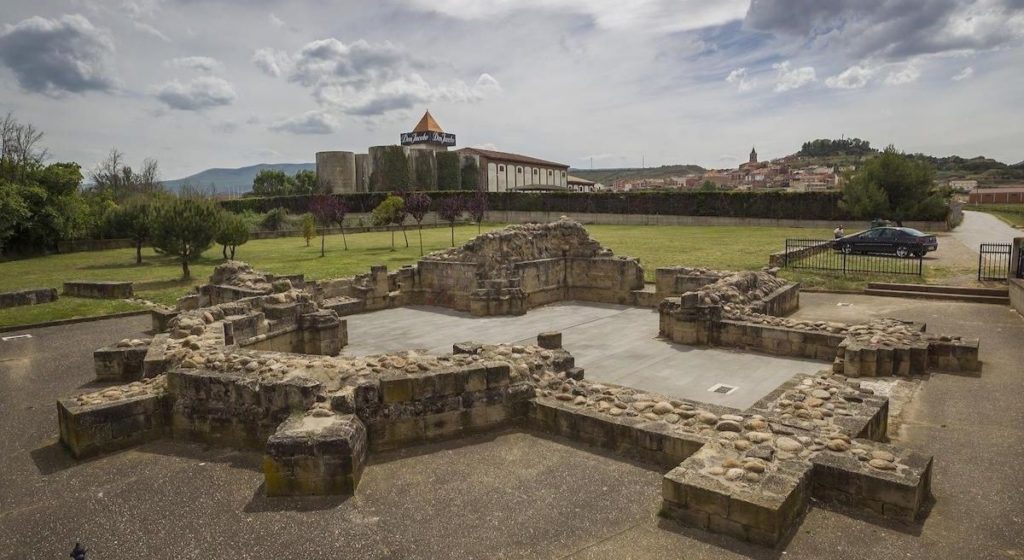 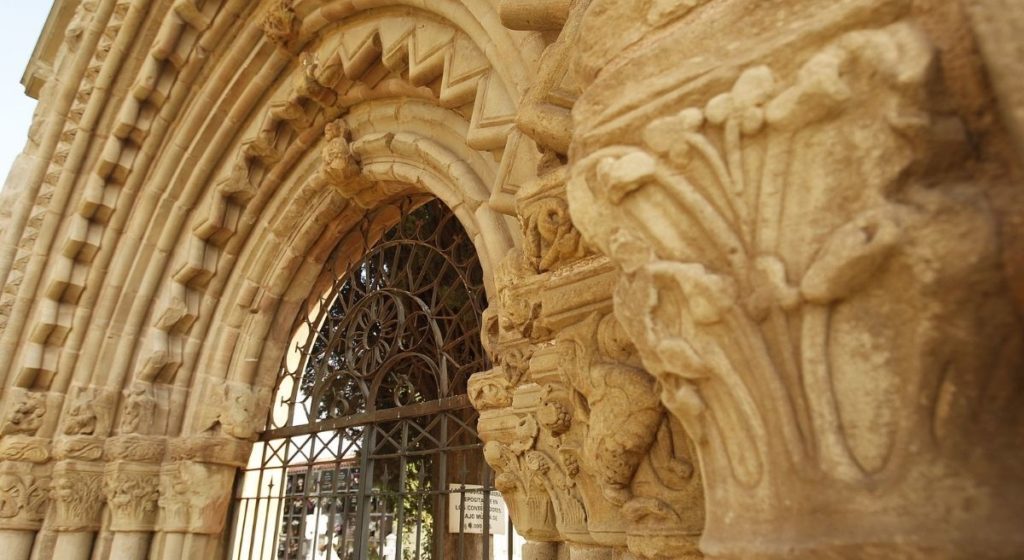 The ornate door to the Hospice of San Juan de Acre, now the entrance to the cemetery at Navarrete (Photo: La Rioja Turismo)

The route to Nájera takes you through a sea of vineyards.  Just before entering the village you can take a slight detour to the nearby village of Uruñuela to visit one of Rioja’s most dynamic wine cooperatives, Bodegas Zinio. Unfortunately their website is only in Spanish but English is spoken at the winery.

Nájera is historically, the most important town on the Camino Francés in Rioja.  It was of great strategic value during the battles for the reconquest of the Ebro valley from the Moors in the 10th and 11th centuries.  You can read a summary of the town’s history here.

King Sancho III proclaimed the Fuero (Charter) of Nájera, the legal basis for the charter of the future kingdom of Navarra.  When Sancho died his three sons inherited his fiefs and at one time Nájera was the capital of the kingdoms of Navarra, Castilla and Aragón.

Nájera’s most important historical monument is the Monastery of Santa María La Real, finished in 1024.  If you only want to visit one church on your hike, this is it.

The church has created a foundation that organizes concerts, art exhibitions and other events  throughout the year.

By this time you will feel like a real pilgrim and are ready to tackle a longer hike to Santo Domingo de la Calzada, a gently uphill trek through vineyards.  An interesting stop on the way is the small village of Azofra, one of the first Riojan villages to be granted the title of “villa”. An important hospice was built here in the 12th century that unfortunately was demolished in the 19th century. The same fate awaited a cemetery where the remains of deceased pilgrims were buried.

An unusual monument on the way out of the village towards Santo Domingo is the “rollo de Azofra”, one of the most interesting statues on the Camino.  A “rollo” is a column erected to warn criminals of the village’s judicial status as a “villa” and that the penalty for robbery is hanging.

Santo Domingo ”de la Calzada” (on the road), as its name implies, is an important stop on the Camino Francés through Rioja.  It boasts two ‘paradores’ (a Spanish chain of hotels and restaurants in historical buildings).  The old town is well preserved and well worth a stroll.

One of the most interesting sights in Santo Domingo is a hen in a cage on the second floor of the church.  There’s a saying about the town:

(Santo Domingo de la Calzada, where the hen clucked after it was roasted).

The legend behind this saying talks about a family and their son who were passing through Santo Domingo on their way to Compostela.  The daughter of the owner of the inn where they were staying fell in love with the young man.  She was rejected however and to avenge this affront, she put a silver cup in the boy’s bags.  She then told the authorities that the boy had stolen the cup. He was immediately arrested and condemned to hang.

The next day, the boy’s parents went to see their son’s body but they found him alive.  The son explained that St. Dominic (Santo Domingo) had saved him from an unjust death and that the parents should spread the word about the miracle.  The parents went to the local military commander to explain that their son was miraculously alive.

The commander said, “Your son is just as alive as the roast hen that I’m eating”, at which time the hen’s feathers grew back and it started to cluck.

The last stage on our hike along the Camino in Rioja is to Grañón, near the border with the province of Burgos. The village plan centers on the Monastery of San Juan from which the rest of the streets radiate.  Grañón’s civil architecture is worth admiring. The ground floors of many houses are made from blocks of stone and the upper floors with wood façades featuring noble family crests.

The most outstanding religious building is the Church of St. John the Baptist with its ornate altar and its baptismal font. The church is especially interesting, given Grañón’s current population of fewer than 300 people.  This attests to the past importance of the village.

To return to Logroño, the easiest way is to walk back to Santo Domingo and take a bus from there. There are several daily buses from Grañón to Logroño but they are infrequent.

La Rioja has a good network of local and regional buses, so it’s easy to visit other interesting villages in the region such as Elciego, Laguardia, Labastida, Cenicero and Haro from the Logroño bus terminal.

An interesting possibility for travelers to consider is a small detour to San Millán de la Cogolla with the monasteries of Yuso and Suso, World Heritage sites.  Here are the first examples of written Spanish in the margin of an ecclesiastical text written in Latin. 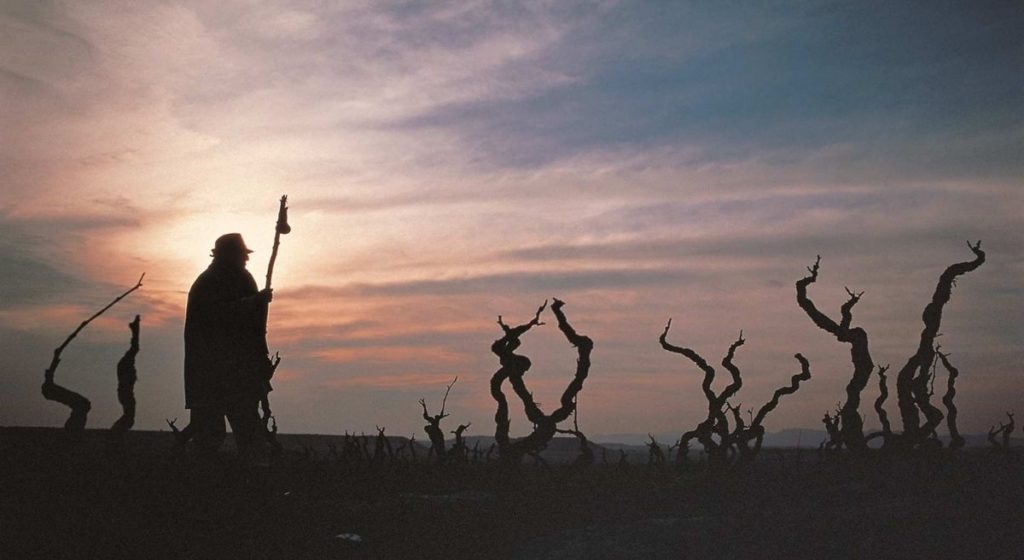 By Tom Perry, Inside Rioja

Learn more about the Rioja wine region by visiting our page: Bilbao | Rioja

← PREV: The Best Road in the World is located in Northern Portugal NEXT: Discover Lausanne and its region through culinary or wine tours! →
Wine Stories