Wine Stories
The world of wine is changing; the next generation of winemakers is taking over. They shape the viticulture of the Mainz and Rheinhessen region with passion and new ideas. Here are three examples:

Growing up in a family of winemakers, Julia Oswald was able to experience the craft first-hand. Thus, it was quickly clear for her that she would follow in her family’s footsteps. After finishing school, she did a winemaker training, which inspired her to also pursue a Bachelor degree in Viticulture and Enology. All the while, she still helped her family at their winery. In 2016, she took over responsibility as winemaker there. This experience and in-depth knowledge helped her come in second place as Young Winemaker of the Year in 2020.

The secret to her success? Amongst others her philosophy: no wine can be made according to plan. Use the framework nature gives you and refine the details – that will get you a wine with character. 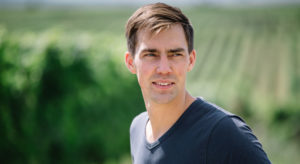 An award-winning winery with equally excellent Victorian gardens – and at the heart of it is Leif Listmann. He and his brother Welf are the seventh generation leading the winery. Their ambition: to get the best out of each vineyard individually.

Yet, Leif’s ambitions also lie elsewhere: Since 2015, he is an active player in the “Weinelf”, the German national football team of winemakers. The team helps to build the bridge between the two cultural assets wine and football. At the same time, it furthers the exchange of knowledge between German and international winemakers.

This is something Leif has also always been passionate about: exchanging ideas with other (young) winemakers. It comes as no surprise then that he is one of the founding members of the “Weinsalon Rheinhessen”. Nowadays, it is an award-winning series of events taking place in Mainz and Darmstadt open to anyone who is interested. It started, however, as a get-together of young winemakers to discuss all matters wine. Not one of them would have thought that it would become this successful. However, they cannot wait to get back to it after Corona restrictions ease. Their motto is now truer than ever: sun down, wine up, party on! 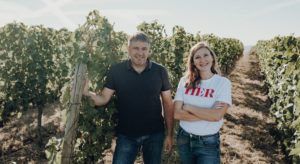 Martina Bernhard-Fazzi always knew she wanted to become a winemaker. And it didn’t take long for her to settle in: after her winemaker training, she started working in the family winery. Using a biodynamic approach, she and her father create “distinctive pieces of nature”. Their aim is to capture the taste of the unique conditions of their home Wolfsheim. “We trust in nature during every step of the process”, emphasises Martina.

Another matter close to her heart is creating more solidarity amongst women. And drawing attention to the abuse which many still suffer from. That is why Martina, amongst others, founded the “Sisters in wine” club. To support it in a more substantial way, she created a new line of wines. Part of the proceeds also go to the nuru women foundation helping females in Ethiopia to build a self-determined life. And success proves her right: it was one of these wines, which was recently selected as one of the EcoWinners 2021 by Ecovin!

← PREV: An incredible future for everyone… who loves wine. NEXT: The Young Guns of Wine in Portugal that you should keep an eye on →
Wine Stories