Best Of Stories
2023 Best Of Wine Tourism winner in the category "Architecture & Landscapes". Château Le Grand Verdus is a large vineyard, covering 120 hectares of vines in the heart of the rolling hills of the Entre Deux Mers.

Built in 1579, on the site of an even older fortified castle, Château Le Grand Verdus is typical of the Renaissance style. Peppermill turrets, watchtowers, and mullioned windows surround the courtyard where ancient citrus trees sit in a collection of large Anduze pots.

Claude Deschamps acquired the property in 1846. A famous architect of the Napoleonic era. He built both ‘Ponts de Pierre’ (the stone bridges that cross the Garonne in Bordeaux) and the Dordogne in Libourne.

Later, In 1974, this preserved architectural gem was listed in the additional inventory of Historic Monuments (I.S.M.H) as a fine examples of Bordeaux heritage.

The need for a new cellar challenged the family. How to marry the architectural heritage of the site with an efficient wine making cellar? The project took two years and was completed in 2019.

It is built half underground to integrate with both the architecture and the surrounding countryside. It boasts the latest wine making innovations with a range of vats adapted to the plots. This allows the expression of the famous diversity.

The ageing cellar welcomes not only traditional Bordeaux barrels but large barrels and clay amphoras.

Vines were first planted at the property in 1947, by Philippe Le Grix de la Salle after the Second World War. The real identity of the wine was created in 1973, when they left the Créon cooperative and began vinifying at the chateau under their own label, working with the legendary professor Emile Peynaud.

In 1975, 24 year-old, Antoine joined his father, after training with Robert Mondavi in the Napa Valley. It was Antoine who expanded the vineyard to its current size, dividing it up into 50 plots. With its size, the property is diverse, there are clay (including the blue clay, famous in Pomerol), limestone and even gravel soils, all adding complexity to the wine.  Ranging from  40 à 110 metres above sea level, it is one of the highest points of the Gironde, with different slopes all adding to the complexity of the terroir. For the grapes the elevation means great sun exposure and cooling breezes, for visitors, beautiful views, for wine lovers, great wines. In 2008, Thomas, the eldest of Antoine’s two sons, joined the team, taking over the vinification and marketing of the wines of the property. 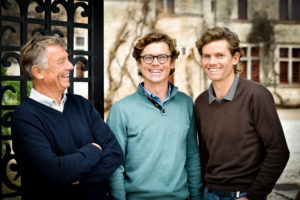 In 2019, his brother Edouard arrived. His passion for agronomy was the impetus for conversion to Organic agriculture in 2020. It’s the long term results of their commitment to sustainable agriculture, with  HVE3 certification (Haute Valeur environmental) in 2018.

Woods surround and run through the vineyards of Le Grand Verdus. They are encouraging this natural reservoir of biodiversity by planting “ecological corridors” of hedges through the vines. It’s beautiful for the landscape but also for the vines. It encourages the bat population, natural predators for the moths that damage the vines, and so much better than using insecticides.

They also plant cover crops between vines to protect from winter soil erosion, store carbon and help biodiversity. These crops are mulched in the spring, developing microorganisms and adding valuable organic matter and nutrients to soils. It also keeps soils cooler in summer, helping to maintain freshness in the wines.

Back to the future 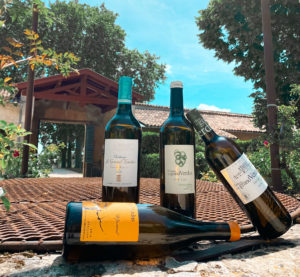 The family are experts at combining new and old and not only in the cellar. Alongside the classic Bordeaux grape varieties, they have planted Syrah. Sourced from Cornas in the Rhone, they are planted on some of their warmer gravelly soils with good sun exposure. Rhone winemaker Edgar Cuilleron was on hand to help for the first 2020 vintage.

In 2021 they planted the Loire variety Chenin-Blanc, sourced from Saumur, on their cooler clay and limestone soils. This is still a work in progress. Dry, sweet or sparkling? They haven’t decided what to produce yet – watch this space.

Edouard and Thomas also wanted to go back in time, replanting a collection of historic red Bordeaux varieties, Castet, Mancin, Gros Cabernet, Bouchales and Jurançon Noir. Nothing if not adventurous, alongside the traditional Bordeaux blends and new varietal wines they produce a pet nat, and a 100% Sémillon orange wine.

Guests can explore both the past and the future when they visit, with tastings of the large range of wines, picnics in the grounds and on summer weekends, wine and tapas evenings accompanied by live music.

They are preserving the best of the past whilst moving into the future.