Bilbao, the industrial and cultural capital of northern Spain, is well known for its innovation through technology development centers and a top tourist destination because of its wide range of its cultural attractions led by the Guggenheim museum, diverse geography, and world-famous cuisine.

Rioja is Spain’s most famous Designation of origin for wines, producing a wide range of reds, whites and rosés, both blends and single varietals. An exciting recent development is the creation of the singular vineyard category.

Bilbao, the most important industrial, commercial and financial metropolis in northern Spain, lies on the coast of the Bay of Biscay. Originally a seaport, in the 15th and 16th centuries the city became a center of commerce between Spain, Europe and America and the region began to develop iron ore mining.

In the 19th century, the city developed industries such as iron, steel, shipbuilding, ship-owning companies, chemical products, banking and electricity, followed later by paper, cement and glass. In the 20th century the region developed the machine tool, automotive components and aeronautical industries.

The post-industrial age has obliged Basque companies, especially those operating in mature industries, to undergo a process of modernization. This has culminated in the creation of technology centers for advanced R&D projects that employ over 5,000 technicians.

Among Bilbao’s cultural attractions is spectacular architecture, featuring the Guggenheim Museum, the Zubizuri bridge, the Bilbao airport passenger terminal, and the Vizcaya Transporter Bridge connecting the left and right banks of the Nervión river estuary.

Bilbao is a vibrant cruise ship destination and the Port of Bilbao, Spain’s third largest.

More than two million people live in the Bilbao metropolitan area. The GDP generated by the Basque economy is Spain’s fifth largest. Per capita GDP is 34,273€, compared with 26,430€ for all of Spain.

In northern Spain, on both banks of the Ebro River, flanked by the majestic Cantabrian and Demanda Mountains, lies the millennial wine region of Rioja. Centuries ago, the excellent conditions for the cultivation of grapevines made this area the region par excellence in the production of quality wines in Spain.

The Rioja identity took hold at the end of the 19th century when it was discovered that it could produce ready to drink wines with a great aptitude for ageing. This specialisation of ageing wine in 225-litre oak barrels culminated in 1980 with the definition and promotion of the Crianza, Reserva and Gran Reserva categories. Today the region still boasts oenological treasures of several decades and even century-old wines in its cellars.

The elegance and balance of Rioja wines are other aspects that have marked its character; pleasant and very versatile wines able to maintain a very consistent style and quality over time, thanks to the mastery of blending techniques. Thoroughly understanding the characteristics of different varieties, pagos (county districts) and parajes (literally small plots of land) has forged the distinctive style of Rioja wines. The Designation evolves with the times and the consumer’s interests, and currently a new emphasis is placed on showing each of the different pieces that make up the puzzle. The great diversity in the plots of land and microclimates takes on greater relevance with the updating and addition of labels such as ‘Vino de Zona’ (wines from certain areas),‘Vino de Municipio’ (wines from certain municipalities) and ‘Viñedo Singular’ (for wines from exclusive vineyards awarded this designation).

Visitors will find lots to do in the Bilbao area. For an overview of the city you can catch the hop-on/hop-off Bilbao City View bus. There are a number of plans catering specifically to young people, seniors, families and couples, or you can walk around yourself because Bilbao is an eminently walkable city.

Rent a bike, a kayak or a paddleboard, take a scenic boat trip down the Nervión river that bisects the city, visit the San Mamés stadium, home of the Athletic de Bilbao, nicknamed ‘La Catedral’ or stroll down the Gran Vía where you can shop at boutiques and department stores or marvel at the palatial mansions.

Outside the city proper you can visit the medieval city of Durango, Karrantza, home to churches and spectacular palaces built by returning Basque émigrés to America, Balmaseda – the oldest town in the province, founded in 1199 and many other interesting towns.

You can find information on the Bilbao Turismo Website or at the tourist office at the Plaza Circular, 1.

Have a look at our
Insiders'
guide

Wine tourism here is more than spectacular modern architecture. The Haro Railway Station District features several one hundred year old wineries such as CVNE, featuring a cellar with an iron roof designed by Eiffel, López de Heredia’s cellar with its underground aging cellars where four generations of the founding family have made wines since 1877, or Bodegas Bilbaínas, founded as Sauvignon Frères, a testimony to Rioja’s debt to French wineries who found the wine they desperately needed when their own vineyards were devastated by phylloxera.

Tourists can discover the history of winemaking in Rioja in underground cellars such as Bodega Conde de los Andes in Ollauri and Bodegas Lecea in San Asensio.

Other wineries and tour companies offer exciting experiences for the whole family such as bike and hot air balloon tours, picnics in the vineyards, wine blending, wine tastings and many others. 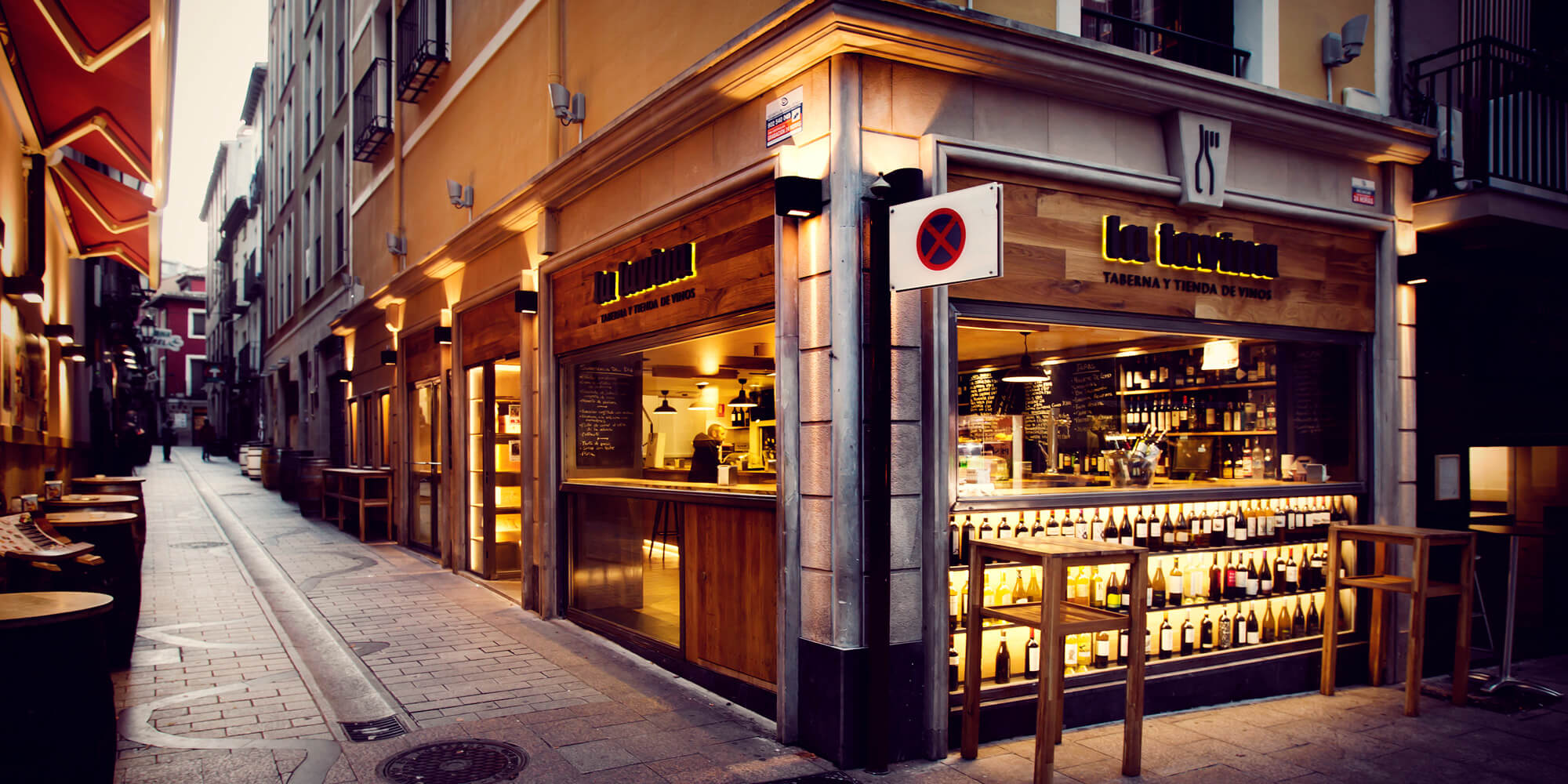 Bilbao, the surrounding province of Bizkaia and the Rioja region, both La Rioja and Rioja Alavesa are meccas for food lovers. The region boasts 20 Michelin stars at 17 restaurants (1 with three***, 1 with 2 ** and 15 with 1*). Besides these temples of fine dining, tourists can find a host of eateries offering not only traditional Basque and Riojan cuisine but hundreds of bars that serve pintxos, both simple ones like the gilda, named after Rita Hayworth with a salted anchovy fillet, an olive and a spicy guindilla pepper skewered on a toothpick, a juicy potato omelette, or complex mini-dishes that are meals unto themselves.

Basque cuisine features fish caught in the cold waters of the North Atlantic and the nearby Bay of Biscay like cod, tuna and hake as well as seafood (spiny lobster, Dublin Bay prawns, mussels and goose barnacles), and beef. These raw materials are the inspiration for dishes like marmitako (Basque fisherman’s stew), cod al pil-pil, txangurro (stuffed spider crab) and hake in green sauce.

Riojan specialties feature lamb, pork, vegetables and legumes that are the basis of the classic chuletillas de cordero al sarmiento (baby lamb chops grilled over vine cuttings), pochas (fresh white bean stew), caparrones (a stew made with red beans with an official quality seal from the village of Anguiano, patatas a la riojana (a stew with potatoes, spicy chorizo sausage and peppers) and bacalao a la riojana (desalted cod in a spicy tomato and red pepper based sauce).

With our travel experts